A ''rig'' is any assemblage of fish-catching devices at the end of a line, perhaps including such things as hooks, lures, bait, weights, leaders, bobbers, or swivels. A rig might even include short additional lines running off the main line. Some of the more-advanced rigs, or parts thereof, that are worth considering are slip bobbers, Texas and Carolina rigs, the Perfection Loop Knot, and tandem rigs.

To suspend a bait effectively in deep water, you need to use a ''slip'' bobber, also known as a ''sliding'' bobber. ''Fixed'' bobbers (floats), such as the common red-and-white spherical ones, work well when fish are no deeper than the length of your rod. When fishing deeper water, though, casting is difficult because of the long length of line between the bobber and bait. Fixed bobbers are not entirely ''fixed,'' but they are not really designed to be moved up and down the line.

A slip bobber, on the other hand, has a hole running through it from top to bottom, and the line goes through the float itself. Because the bobber slides, it can be reeled up almost to the tip of the rod. As soon as it is cast, though, the bobber floats on the surface while the line slips through until it is stopped by some device that holds the bait at the desired depth.

That device is a bobber stop. This is usually made of a short piece of line, tied with a thick knot of some sort. You can use a knot as simple as the one shown here. Whatever kind of bobber stop you use, it should be placed on the line first. Slide this up or down the line, depending on how deep you think the hook should be.

Slide a small plastic bead onto the line to keep the bobber stop from going inside the bobber. Add the slip bobber. Tie a hook on the end of the line. Add 1 or 2 split-shot sinkers a little above the hook, to help the line to slide through the bobber.

When you cast, the baited hook will pull the line through the bobber until the bobber and bead hit against the bobber stop. When that happens, the hook will stay suspended at the intended depth below the bobber. Later you can adjust the bobber if you want to change the depth at which to fish. The bobber should be vertical at the surface – if not, it means your hook is on the bottom and the line is slack.

Keep your slip bobber close to the boat when you're fishing in deep water. Anchor near the fishing spot and lower the line over the side. This way, you can set the hook with a direct pull. Avoid casting the slip bobber too far from the boat. If the bait then sinks into deep water, the bobber creates a right angle between you and the bait. It's then difficult to set the hook, because you don't have a straight pull.

You can rig plastic worms and similar lures in many ways. The easiest would involve just tying a hook on and using it without a weight. This weightless method works well in shallow water, or when fish are close to the surface.

However, in deeper water, or when fish are close to the bottom, there are 2 other ways of rigging soft plastic baits: the Texas rig and the Carolina rig.

1. Put a slip sinker (in-line bullet sinker), about the same diameter as the worm, on your line, and then tie a hook to the line.

2. Push the point of the hook through the head of the plastic worm for about 1/2 inch.

3. Pull the hook point out through the side of the head of the worm.

4. Keep pulling the hook through the plastic worm and out, until the eye of the hook meets the head of the worm.

5. Turn the hook around so that the point of the hook faces the body of the worm, and bury that point slightly in the worm.

Don't bury the hook too deeply, though, or even parallel to the worm, or it won't catch a fish. The point should be covered, but only enough that it can come back out of the plastic worm readily if a fish strikes.

Move the worm along the bottom a few inches at a time, pausing for a few seconds after each tug. You should be able to pull the worm through heavy cover such as weeds, brush, or logs, because the point is concealed and therefore unlikely to snag.

If you see the line twitching or otherwise moving, point the tip of the rod in the direction of the worm, reel up any slack, and set the hook quickly with a strong sweeping motion.

The Carolina rig is only slightly more complicated than the Texas rig. It makes it possible to fish far down, yet allows the plastic worm to float off the bottom.

1. Put a slip sinker onto the line.

2. Tie a swivel onto the line, using a Trilene Knot (or a Palomar Knot).

3. You might want to add 1 or 2 plastic beads as noise-makers to attract fish.

6. Thread the plastic worm on the hook in the same manner used for the Texas rig.

The Perfection Loop Knot is a good one to use for creating dropper lines -- short lines, perhaps 6 or 12 inches long, that are fastened at equal distances along the main line.

1. Make a bight about 1 or 2 inches wide in a short piece of line, crossing under and then over the standing end.

2. Take the end and do the same again, creating a second bight on top of the first.

3. Run the end between the two bights.

4. Pull the second bight through the first bight, moving away from the standing part, and tighten the entire knot. 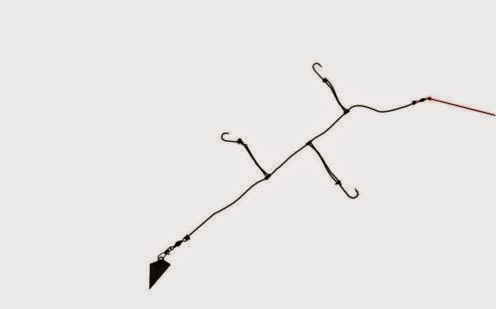 A tandem rig, as the name suggests, is for fishing with several hooks at once, thereby increasing your chances of catching fish. Using short pieces of line and the Perfection Loop Knot described above, make 2 or 3 dropper lines. Fasten a hook to the other end of each dropper line, using a Palomar Knot or a Trilene Knot.

Now you need to go to your main line to tie what are basically 2 or 3 Palomar Knots (see Section 2, ''Knots'') – what might be called ''sideways'' Palomar Knots, perhaps 12 or more inches apart. Normally with a Palomar Knot you have an end only a few inches long to deal with. But for a tandem rig you will need to use an ''end'' that is much longer, at least 3 feet. In effect you then ''pinch'' sections of the main line in order to create those 2 or 3 Palomar Knots, each of which is used to hold a dropper line. Add a sinker to the very end of the main line.

Posted by Peter Goodchild at 6:08 PM