Peak Oil and the Myth of Sustainability 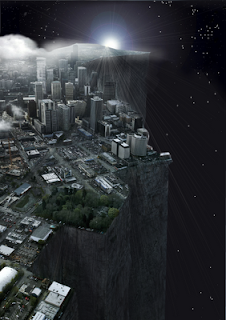 One often hears of the need for "sustainability," and of plans to re engineer human society in some manner that will enable the production of goods, and the consumption of resources, to extend more or less eternally into the future. Civilization will thereby, we are told, become both more pleasant and more equitable, and the planet itself -- land, sea, and sky -- will no longer be traumatized by the presence of humans. But those who believe in "sustainability" might wish to consider whether such an ideal state is even theoretically possible.

It is a well known fact that the human race is in big trouble with overpopulation and with excessive consumption of resources. These two problems reinforce one another; they are synergistic. The message has been around for several years. In 1970, for example, Paul and Anne Ehrlich published Population Resources Environment. In 1972, Donella H. Meadows et al. published a book entitled The Limits to Growth. In 1982, William R. Catton, Jr. wrote Overshoot. The population of the earth in 1950 was less than three billion. In the year 2000 it was six billion. What it will be in the future is not certain, but at the moment it is over seven billion.

Right now the world is using about thirty billion barrels of oil per year. But the oil is becoming scarce. The peak of oil production was about 2010, although it is now at a brief and uncertain plateau. In the very near future, oil production will noticeably decline, at an annual rate of perhaps four to six percent annually, which means that annual production will drop to half of its peak level at some time between 2020 and 2030. But the demand for oil will not decline. The population is still climbing, and will continue to do so until starvation sets in. And contrary to popular belief, computers and other high tech marvels are not creating a world in which "information will replace transportation." So -- in terms of oil alone, there is a serious problem of resource depletion.

Incidentally, "alternative energy" doesn't work. As John Gever et al. explain in Beyond Oil, it is physically impossible to use wind turbines etc. to produce the same amount of energy that we are now getting from thirty billion barrels of oil. "Alternative energy" will never be able to produce more than a small fraction of that amount.

More than half the people in the world are either undernourished or malnourished, but agriculture presents one of the worst resource problems. Topsoil is being depleted everywhere. And there is simply no more land available for increased agriculture, unless one considers marginal land that can only be used with expensive high tech methods of irrigation or perhaps desalination; projects of this sort obviously cannot last long.

One can debate some of the above numbers, but even if we shift them up or down by fifty percent, the general effect is still the same. It is just not possible for the planet Earth to handle "the human condition," nor is there any way of improving those numbers in any significant way. And that's the bottom line. The numbers cannot be changed. The present numbers are just not "sustainable."

If all of the above is true, then there is no point in talking about "sustainability." What will happen, in fact, is not sustainability but disaster. The future will be one in which the reciprocal effects of overpopulation, resource consumption, and environmental destruction reach a cataclysmic maximum, resulting in a massive die off of the human species. There may be survivors, but there will not be many. All talk of sustainability is just fashionable chitchat. The word has use mainly as filler for political speeches. It always sounds good when politicians talk about "sustainable development," when what they really mean is "business as usual but with a little ecological whitewash." "Sustainable development" is an oxymoron. If the human race is on a collision course with the three above mentioned problems, and if there is no way of averting disaster, then there is no point in talking about how to how to deal with that disaster. It would be far more practical, far more useful, to say: "Okay, disaster is inevitable. What do we do after that?"

The ancient Roman world went through very much the same stages as our own. While Rome was a republic, not an empire, the Roman people adhered to the four virtues of prudence, fortitude, temperance, and justice. But the Roman world became bigger and bigger. There were conflicts between the rich and the poor. There was a serious unemployment problem created by the fact that slave labor was replacing that of free men and women. The army became so large that it was hard to find the money to maintain it, and the use of foreign mercenaries created further problems. Farmland became less productive, and more food had to be imported. The machinery of politics and economics began to break down. The fairly democratic methods of the republic were no longer adequate for a world that stretched from Britain to Egypt, and the emperors took over. After Augustus, however, most of the leaders were both incompetent and corrupt. The Goths sacked Rome in A.D. 410. The Empire was crumbling. The cities and main roads were finally abandoned, since they no longer served a purpose. For the average person, the late Roman world consisted of the village and its surrounding fields.

If we have already established the premise that "the human race faces unsolvable problems," the answer is not to waste further amounts of time and energy in asking whether those problems exist. The best response is to find ways for a small number of people to survive within that problematic world.

Posted by Peter Goodchild at 12:11 AM