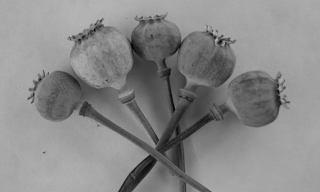 With help from The People's Common Sense Medical Adviser in Plain English, by R. V. Pierce. His comments are in bold.There are some beneficial herbs that one is NOT likely to find in the books on herbal medicine now available in libraries and book-stores. Perhaps the main reason for their absence is that the most powerful medicines (especially in the wrong doses) tend to be the most toxic and are therefore under legal controls. These same medicines, however, are generally also psychotropic drugs -- "recreational drugs" -- and so the reason for their banishment may be as much moralistic as medical. Yet these plants were commonly described in "family medical guides" from before about 1920. The following is intended only for academic interest, with relevance to issues of post-collapse living. None of these plants should be utilized without professional medical guidance.

The scientific names and the common English names are included below, although common names are confusing because one species may have several common names, or one common name may be applied to several species.

HYOSCYAMUS (Hyoscyamus Niger), commonly known as Henbane. The herb is used. It is a powerful narcotic, and unlike Opium, does not constipate the bowels, but possesses a laxative tendency. Therefore, it may be employed as an anodyne for allaying pain, calming the mind, inducing sleep and arresting spasms, when opiates are inadmissible. Dose--Of alcoholic extract, one-half to two grains; of fluid extract, five to ten drops; of the concentrated principle, Hyoscyamin, one-twelfth to one-fourth of a grain.

BELLADONNA (Atropa Belladonna) or Deadly Nightshade. The herb or leaves are a valuable agent. In overdoses, it is an energetic, narcotic poison. In medicinal doses it is anodyne, antispasmodic, diaphoretic, and diuretic. It is excellent in neuralgia, epilepsy, mania, amaurosis, whooping-cough, stricture, rigidity of the os uteri, and is supposed by some to be a prophylactic or preventive of Scarlet Fever. Its influence upon the nerve centers is remarkable. It relaxes the blood vessels on the surface of the body and induces capillary congestion, redness of the eye, scarlet appearance of the face, tongue, and body. Dose--Of fluid extract, one-half to one drop; of tincture, one to two drops; of concentrated principle, Atropin, one-thirtieth to one-sixteenth of a grain; of the Alkaloid, Atropia, one-sixtieth of a grain. Even the most skillful chemists are very cautious in compounding these latter active principles, and the danger of an overdose is great.

STRAMONIUM (Datura Stramonium). Stramonium, also known as Thorn-apple, in large doses is a powerful narcotic poison. In medicinal doses it acts as an anodyne and antispasmodic. Dose--Of extract of the leaves, from one-half to one grain; of the fluid extract, from three to six drops.

ACONITE (Aconitum Napellus). The parts used are the root and leaves. Aconite slows the pulse, diminishes arterial tension, and lowers the temperature of the body in fevers. It is an effectual remedy in acute inflammation of the tonsils and throat, in acute bronchitis, in inflammation of the lungs, and pleurisy, in the hot stage of intermittent and remittent fevers, in the eruptive fevers, in fever arising from a cold, and in some forms of neuralgia. Acute suppression of the menses from a cold, may be relieved by the tincture of aconite in drop doses every hour. Dose--Of the tincture of the root, from one-half of a drop to two drops, in a spoonful of water, in acute fevers and inflammations, from one-half drop to one drop should be administered every half hour or hour, according to the severity of the symptoms.

FOXGLOVE (Digitalis purpurea) slows the action of the heart, lowers the temperature, and acts indirectly as a diuretic. It is especially valuable in the treatment of scarlet fever and in dropsy. Dose--Of infusion, one-half drachm to one-half ounce; of the fluid extract or strong tincture, from two to ten drops. It should be used with caution. A poultice made of the leaves and placed over the kidneys is an effectual method of employing the drug.

OPIUM (Papaver Somniferum). Opium is a stimulant, anodyne, or narcotic, according to the size of the dose administered. Dose--Of the dry powder, one-fourth to one grain; of tincture (Laudanum), five to fifteen drops; of camphorated tincture (Paregoric), one-half to one teaspoonful; of Morphine, one-eighth to one-fourth grain; of Dover's Powder three to five grains.

INDIAN HEMP (Cannabis Indica). An East Indian plant. Dose--Of the extract, from one-fourth to one-half grain, of the tincture, from three to eight drops; of the fluid extract, from two to five drops. The plant known as Indian Hemp, growing in this country, possesses very different qualities.

It's curious that the first three above all belong to the same family, the Solanaceae, which also includes tomatoes, potatoes, and tobacco, all of which are also toxic, at least in certain parts of the plant. Yet those first three in the list above were extensively used, in the right dosages, as pain relievers (aka analgesics, anodynes, anesthetics, etc.).

Foxglove is famous for treatment of heart problems. Opium and Indian hemp are pain-relievers or have other beneficial effects on the nervous system.

Any revival of the use of these plants would obviously have to take into consideration the fact that the wrong application could be toxic or even fatal. Yet the fact remains that they are more powerful than less tightly controlled herbal remedies. Any future breakdown of social order, perhaps to the point where there is a complete collapse of formal medical systems, might be ameliorated by an understanding of these older remedies.


Posted by Peter Goodchild at 4:00 PM