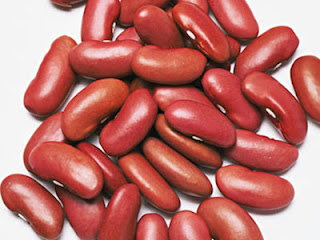 Next to grains, beans are often the most important part of the diet, especially if you're a vegetarian. Beans are high in protein, they will grow almost anywhere, and once they've produced a few leaves they need little or no irrigation. Beans and other legumes add nitrogen to the soil; traditional agriculture has always relied on their vital service.

All beans and peas are members of the family Leguminosae. Phaseolus vulgaris includes many of the varieties commonly eaten: white (and navy) beans, kidney beans, pintos, black (or turtle) beans, cranberry (or horticultural) beans, Jacob's cattle (or trout) beans, and soldier beans, among others. Scarlet runners are P. coccineus.

A second way of classifying them is by the way they grow. Bush beans grow only a couple of feet high and do not need supports. Pole beans are vines and are generally allowed to grow up poles, strings, or other supports. A garden planted with pole beans will produce 3 or 4 times as much as the same area planted with bush beans. Pole beans are also generally more drought resistant than bush beans. It isn't essential to support pole beans (using poles or nets), and if you're using such supports it takes time and energy to put them up.

A third way of classifying these plants is by the way they are eaten. From the point of view of survival gardening, what is most important is the production of "dry beans": allowing the beans to dry completely before they are shelled and put into storage. However, many people prefer eating beans as "green beans." Then there are beans that are eaten in a sort of intermediate stage as "green shell beans" -- lima beans, for example, are often eaten this way.

Beans cannot handle cold weather, so wait until the date of the last spring frost, or even later, before planting. Make your rows 2 feet (60 cm) apart. Make a furrow about 2 inches (5 cm) deep with the edge of a hoe, and drop one bean into the furrow every 6 inches (15 cm) and cover it.

Pole beans without supports should be planted a foot (30 cm) apart, in rows 3 feet apart. If you want to plant pole beans with supports, however, you may want to make tripods of 6-foot (2 m) poles and plant about 3 beans at the base of each pole.

You can also broadcast beans (scatter them randomly over the tilled ground), if you want to save time and energy. The soil must be well dug, and you should be sure of adequate moisture around planting time. You may waste some of your seed beans by broadcasting, but that method is quicker and easier than planting in rows. Use about 120 pounds per acre (130 kg/ha), as for row planting.

It will take about a week or two for the beans to show themselves above ground. Beans need little water, but they should be well hoed, partly to remove weeds and partly to keep the surface of the ground well pulverized to form a "dust mulch," which will hold in the moisture below the surface. Beans that are broadcast, however, can't be hoed.

Wait until the plants are brown and then pull up the plants and strip the pods. Dump the pods on a clean surface. Leave the pods to dry further, turning them occasionally, until the pods are so brittle that they crumble. It's best to do the drying outside in the sunshine, but bring them in every night so the dew doesn't fall on them. Then beat the pods thoroughly, or stamp on them, to get the beans out.

Winnow the beans to get rid of the bits of pods, leaves, and stems. The process of winnowing is the same as for grains: on a windy day, toss the beans into the air, or pour them from one container to another. Put all the waste material on the compost heap, or dig it straight into the ground.

Now leave the beans to dry for another week or two. Stir and turn the beans as they are drying, and don't leave them piled thickly on top of each other. Be careful: if the beans are not thoroughly dry, they become moldy in storage, and the crop will be lost. Beans may look absolutely dry on the outside, but if they aren't dry inside before storing they will certainly go moldy. When they are completely dry, they should be stored in a cool, dry place -- but not in airtight containers. In southern areas, stored beans may be attacked by insects; if insects start doing serious damage, you might save your beans by boiling or roasting them right away.

Beans can also be dried when they are "green beans." Blanch them (drop them into boiling water for 2 minutes) and then carefully sun-dry them. In really sunny weather, the blanching isn't necessary.

It is best not to work among your bean plants when they are wet with dew or rain, because you could be spreading diseases from one plant to another. Beans can also be bothered by some insect pests: aphids, cabbage loopers, corn earworms, European corn borers, or Japanese beetles. The worst insect, however, is the Mexican bean beetle, which looks like a large brown ladybug. Handpicking of these insects is sometimes the best remedy.

Part of your crop will be saved to plant next year. Keep an eye on the nicer plants, and earmark those for your next year's crop. Choose the best, not the earliest; contrary to popular belief, beans from pods that appear late in the season do not produce slower plants the next year. With proper care, dried beans will stay viable for about 3 years.

Other types of beans than P. vulgaris might be more suited to your area. A more southern species is teparies, P. acutifolius var. latifolius. You might consider garbanzo beans (chickpeas), Cicer arietinum. Another Old World legume is lentils, Lens culinaris. An Asian favorite is adzuki beans, Vigna angularis. If you live in the southern United States, you can grow any of the many varieties of V. unguiculata, the southerns: field peas, pea beans, crowders, black-eyed peas, or yellow-eyed peas. Lima beans (P. lunata) need warm soil and a long summer, but they are worth growing in more southern areas; they should be planted two weeks after the last spring frost.

Broad beans (Vicia faba), also known as fava beans, horse beans, and Windsor beans, can be grown in North America in spring or fall during cool weather; in fact, they will only do well if you have a long stretch of cool, damp weather. Plant them 1 inch (2.5 cm) deep as soon as the soil can be worked in spring. They will be ready to pick in 2 to 3 months, but the harvesting period is not long. Broad beans are often eaten as "green shell beans": when the beans are large but not hard, they are removed from the pods. Or you can allow them to dry completely, at which point they are easy to store. Some people, especially of Mediterranean descent, are allergic to broad beans.

Soybeans (Glycine max) have been popular in Asia for centuries, but westerners have gotten to know them over the last few decades. It is unfortunate that most of the soybeans in North America go to feed livestock. Soybeans are easy to grow, even in the southern parts of Canada. Almost any kind of soil will do, although they prefer well-drained alkaline soil. They need 100 days of warm weather but can handle long periods of drought. Use about ½ pound (250 gm) of seed for 100 feet (30 cm) of row, or 80 pounds per acre (90 kg/ha). They can also be broadcast. Soybeans yield well; you could get 3,000 pounds per acre (3,400 kg/ha).


Soybeans are about 40 percent protein, and they can be converted into numerous foodstuffs. To use them as "green shell beans," drop the pods into boiling water for 4 minutes, and the beans will come out more easily. After that, cook the beans for about 15 minutes, or add them to any grain you're cooking. If, instead, you leave the beans to dry fully, you'll have to soak them overnight and then cook them for an hour in about 3 times as much water, like other dry beans. You can also use the dry beans for flour, by putting them through a grain mill. The soy flour can substitute for part of the wheat flour in a bread recipe.