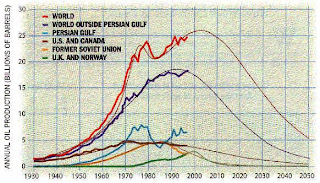 A time frame for systemic collapse can be extrapolated from a chart of estimated past and future oil production. The production chart shown here is from Campbell and Laherrère’s 1998 Scientific American article, "The End of Cheap Oil," and most other estimations give a reasonably similar curve. Roughly speaking, with a 3 percent annual decline, the world's oil production in 2030 will be half that of the peak amount. I am excluding, of course, every flash-in-the-pan "Miracle of X Energy," which ranges from solar power to chicken manure to shale. All other visions of "doom" are trivial in comparison with that of the decline in hydrocarbons: neither real-estate speculation nor climate change is going to have so great an effect on the human world.


Most of the subsidiary time frames for collapse -- such as those for electricity, for the general economy, and for population -- will parallel that curve, for the simple reason that everything in modern industrial society is tied to the production of oil, and to a lesser extent other fossil fuels.

In "The Olduvai Theory" (The Social Contract, Winter 2005-06), Richard C. Duncan points out that the failure of electricity will be the first really distinct, "on-off" indicator of collapse. His reasoning is that, although fossil fuels are the primary sources of energy in our industrial civilization, we need to keep in mind the importance of "end use."

Since mining, manufacturing, and transportation are all dependent on oil, the next parallel can be found in the rather broad topic of economics, with issues ranging from price inflation to unemployment. I suspect this will be in two "phases," divided by the point at which money as such is no longer an important means of exchange; past examples occurred with the crash of the USSR, and in Weimar Germany.

Because of famine caused by a failure of agriculture in the absence of fossil fuels, the fall of population will appear as roughly another parallel to the decline in fossil fuels. Some critics have said that the two do not necessarily go together -- or, rather, "fall" together. Yes, of course, it is possible that to some extent humanity will learn to "make do with less." But that remedy can only be stretched so far, for a simple mathematical reason. In modern industrial society, fossil fuels are the source of more than 90 percent of the energy -- in the strictly scientific sense of the word "energy." If we take away 90 percent of the energy, we necessarily take away most of the population. And we cannot replace that 90 percent of the energy with some "alternative" form, because there isn't enough of any mysterious "alternative energy" to make much difference. Again roughly speaking, a 50 percent decline in oil will be matched by a 50 percent decline in population -- mainly by famine.

Incidentally, a voluntary reduction in population would not work. For that matter, neither would a mandatory reduction in population, and for the same reason. As stated, oil production will be falling about 3 percent annually. Even if every woman on earth stopped having children from this day forward, an utterly impossible situation anyway, birth control in itself would not enable a 3 percent annual reduction in population. At best, an immediate and universal "No Child Policy" would accomplish very little. Growth rate equals birth rate minus death rate, but the present death rate is only about 1 percent, and even with an aging population it would not get much beyond 2 percent -- not enough, in other words, to match the fall in oil production.

But if anyone really wants a magic number for a date of systemic collapse, a good choice would be that date of 2030. As stated, that's the date at which, with a 3 percent annual decline in oil production, the year's production will be half of that in the peak year. And half of peak oil means roughly half of everything else in human society. A very important "half" will be population, because the rest will have died of famine. And that last item is the one that very few people can mentally assimilate.

Posted by Peter Goodchild at 11:05 AM