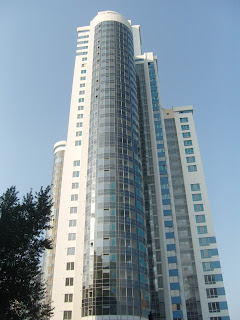 There are two separate reasons why it would not be feasible to create a "vertical society," i.e. a world with a much larger population than at present, with everyone housed in buildings a thousand stories high in order to keep most of the land surface available for agriculture.
By the way, I am not discussing birth control as an alternative to the vertical society, since the world merrily doubles its population every few decades, with no regard for common sense. Even in (mainly industrialized) countries where the birth rate is low, the immigration rate may be high, as in Canada, Australia, and the US, thanks to the stupidity of government policies, and so one excellent solution is offset by one terrible mistake. In any case, conscious "family planning" will be both inadequate and superfluous compared to the rapid massive mortality about to be caused by famine.

The first reason why the vertical society would not work is that there is a simpler response than to build such very expensive and technically demanding structures. The theory behind the construction of them is that urbanization is encroaching on agricultural land. Perhaps 3 percent of the world's land mass is now urbanized, and I would certainly not deny that this is already a regrettable situation. It is also true that the world's agricultural land constitutes about 10 percent of the total land surface. (The other 90 percent of the earth's surface is simply barren, at least in the sense that it cannot support the production of crops.) To a large extent, unfortunately, the urbanized land overlaps with the agricultural land. One can see that here in Canada, for example: about 7.5 percent of Canada's Class 1 agricultural land has been urbanized, although the figure drops if we include Classes 2 and 3, the less productive land.

In other words, urbanization would have to be far greater than at present for the world to be literally "standing room only." There is a shortage of farmland, not a shortage of land per se. It might therefore be easier to move the increasing numbers of people outward to the non-arable areas. The difficulties and costs of transporting food from the agricultural lands to those non-arable areas would probably be less than going in the opposite direction: building gigantic vertical habitats, within the zones of arable land, and then distributing the food upward inside each of those structures.

(What would happen, though, if we actually reached "standing room only," filling every desert and mountain range? Probably the same kind of problem that would occur if there were no more room left for thousand-story skyscrapers.)

The other reason, far more important, for avoiding a policy of creating a vertical society is that fossil-fuel production is now (or will soon) be going into decline. By the year 2030, annual production of fossil fuels will be only about half of what it was at the peak. Without fossil fuels, industrial society will collapse. (No, sorry, there is no "alternative energy" that is going to save the day, and certainly not for a world containing many billions of inhabitants.) As fossil fuels disappear, so do mining, manufacturing, transport, communication, and everything else. As David Pimentel points out, without fossil fuels for fertilizer and pesticides, and for the cultivation, harvesting, and transportation of crops, yields per hectare drop to less than a third of their present levels. The same problem of decline applies to a hundred other non-replaceable natural resources, from aluminum to zirconium, and contrary to another misconception recycling does little to reduce decline. There is simply not enough arable land, and not enough of the world's natural resources, to maintain a population much larger than that at present, no matter what type of housing we choose. We are returning to the Stone Age, and in that world there can be no thousand-story skyscrapers.

And do I want to be living in a high-rise of any sort on the day when the elevators, the lights, and other electrical devices stop working, when there is neither drinking water nor plumbing, and the heating has failed, and there is no fuel left for either private or public transportation, and getting out of town means a very long walk? No, not really.

-- Think of the above as a poem for Earth Day, which was founded in 1970, primarily by Senator Gaylord Nelson, who was quite concerned about overpopulation. Since that day, the Earth's population has nearly doubled, and it's politically incorrect to use the word "overpopulation." Sweat shops are good for business.

(with thanks to Tim Murray for referring me to Robert Silverberg's novel The World Inside, chapter 4 of which uses the term "vertical society")

Posted by Peter Goodchild at 10:34 AM