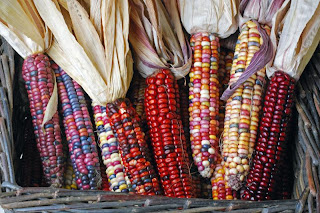 The word "corn" is somewhat confusing, because in England "corn" refers to any type of grain, while "maize" is the name for the plant that Americans and Canadians call "corn." In any case, the scientific name of the latter is Zea mays.


Most of the native people of North America grew their own food, and by far the most important crop was corn, which was first developed around 7000 B.C. Corn needs warm weather, but the natives nevertheless grew corn quite far north. Even the Huron Indians of southern Ontario had large corn fields, and there were large corn fields around what is now Montreal. All of the modern kinds of corn, which give us popcorn, cornmeal, "corn on the cob," and so on, are descended from Indian varieties of corn, although in those days there were far more varieties than we have today.


Nowadays there are two main types of corn, sweet corn and field corn, although these are not botanical distinctions. The former is the type that we usually eat as "corn on the cob," while the latter is the type that is either ground into cornmeal or fed to animals. In general, the sweet varieties of corn are less suitable for drying, and they have more problems with diseases and insects. Field corn, on the other hand, is definitely worth growing. It has a higher yield per acre than any other temperate-climate grain, and (unlike some other grains) there is no complicated threshing or winnowing involved. In Canada, the United States, and Europe today, by far the most common type of corn is a field corn called "yellow dent." Less common is "flint" corn, a harder type (hence the name) that lacks the "dent" at the top of the dried kernel. Popcorn, the most ancient of all the surviving types of corn, is actually a sort of flint corn.

In modern times, however, you're unlikely to find varieties of corn that qualify as both "field corn" and "open-pollinated," with the exception of those that are generally known as "Indian" or "ornamental" corn. As long as you don't choose a variety that has too long a growing season for your area, you should do fine. Indian corn can be ground for cornmeal, or at an earlier stage it can be cooked in the same manner as sweet corn, although the colors don't look so pretty if the ears are boiled. The types of Indian corn listed as "flour" corn are easier to grind and therefore more practical than the harder types.

Corn is technically the simplest of grains to grow. It has multiple uses as food, since the kernels can be turned into everything from soup to bread. The silk can be steeped to make a pleasant tea. But other parts of the plant are useful. The cobs, after the kernels are removed, can provide fuel for a campfire or stove. The husks can be made into rope, baskets, or dolls, and they make a good stuffing for a mattress.

There are, however, several drawbacks to growing corn. A common fungal problem is smut, which appears as large grayish lumps on the ears; be sure to burn these right away, since the spores can last for years -- or eat them when they're young, since they taste like ordinary mushrooms.

Insects are often the biggest worry. Corn earworms can devastate a crop. The most troublesome insect is the European corn borer; the larva is pale gray, brown, or pink, with a dark brown or black head.

There are no "organic" methods that will totally prevent insects from attacking your corn. There are, however, a few tricks that will reduce insect problems considerably: grow field corn rather than sweet corn; grow open-pollinated types; plant late; bury or burn all crop residues (the plants after the ears have been harvested); grow corn with longer and tighter husks (older varieties are best for this reason); keep your soil in good condition; and don't peel back the tips of the husks to see if the ears are ripe (since that invites insects).
Corn is also a favorite food of many birds and mammals. One defense is to plant several kernels to a hole, in the hope that the animals will leave one to grow. Plant the kernels deeply, and step on them to keep them hidden. Another tactic is to post a guard over the field: dogs, children, and elderly people can be conscripted, and scarecrows might work. Or you could put up a high fence.

As food, corn has the defect that it is low in isoleucine and lysine, two of the essential amino acids that make up protein. To take care of this deficiency, you should eat corn with beans, which have roughly the opposite amino-acid composition. Corn is also low in one of the B vitamins, niacin (nicotinic acid), and again the problem can be remedied by eating beans.
Corn will grow on almost any kind of soil, although it does better on rich soil, high in nitrogen; it's best to plant a legume such as beans, alfalfa, or clover, in the year before you plant corn. In the north, sandy soil is better, since it heats up more quickly in the spring. It also needs a lot of light, so don't plant it where trees or houses are going to cast a shadow.

Plant your corn around the time of the last spring frost, but if you want to play it safe you might want to wait a few more days because corn is sensitive to cold weather. Just make sure you give the plants plenty of room: the kernels should be planted about 1 or 2 inches (2.5-5 cm) deep and about 2 feet (60 cm) apart, in rows that are 3 feet (1 m) apart. In an arid area, you might want to increase these distance. Many of the native tribes planted the kernels in clusters separated by perhaps 3 feet (1 m) in every direction; this method may have conserved water or ensured that a few plants would survive depredation by animals.

If you're growing field corn, you probably don't need to add water, but in an arid climate you may have to give each plant an occasional cup of water during the first weeks of growth.
About a week after you've planted the kernels, they'll appear above ground, and after that they'll grow at an amazing rate. If you lose any plants, just replace them. You can also try replanting, if you have some that need thinning out, although replanted corn doesn't always grow.

Each corn plant has a male part and a female part. The male part, at the top of the plant, produces pollen, which is so light that the wind should be able to blow it onto the female part of another plant. If this happens, the pollen mysteriously travels along the silk, and the result is germination. If the entire process is successful, the mature ear of corn will have all its kernels nicely filled out. If the pollination has not been entirely successful, you will notice gaps in the rows of kernels on an ear. In order to maximize the chances of successful pollination, it is important that each corn plant be surrounded by other corn plants. That is why corn should be planted in blocks rather than single rows.

Corn plants often have "suckers" (tillers), small stalks that rise up beside the main stalk. There is no reason to remove suckers from a plant, in spite of advice to the contrary. Actually, suckers provide more leaf area for the plant, which means that it can react further with sunlight to provide more food energy for its growth.

You could try growing corn, beans, and squash together, as the native people used to do, although the crowding of plants might create a problem with the consumption of rainwater. On the south side of the corn patch, about two weeks after the corn is sown, plant one pole bean beside each corn sprout. The beans grow up the corn stalk, utilizing the land more fully, and the beans replace some of the nitrogen that the corn takes out of the soil. You can also plant squash among some of the corn plants: put about 3 squash seeds in a hole, about 1 inch deep, a few inches away from the base of each of the corn sprouts.

Weeding is simple, since you can walk around the plants freely. Give the land a weeding before you plant the corn, of course. You can give the plants another good weeding as soon as they come up. Once the corn gets to be about knee-high, however, don't put the hoe more than an inch into the ground, or you'll damage the roots, which are quite close to the surface and reach out horizontally for a foot or so.

Unlike most other grains, those of sweet corn will not last long as viable seed -- perhaps 4 years, perhaps only 1. You need to keep replanting it on a regular basis. But field corn will stay viable for many years.

When a crop has grown, look for the healthiest plants and the best ears, and save these for your next year's crop. You might want to be even more selective: from each ear, choose the best kernels from those ears, those in the middle rather than the ends of the ear.

Corn, has a problem with genetic deterioration, so it should not be grown indefinitely from its own "progeny." You can save some of the dried kernels and replant them to form the next year's crop, but eventually you may find your corn plants becoming degenerate. To avoid such a problem, always mix the kernels from at least 100 plants if you want to use the kernels for the next year's crop; 200 plants would be better. Even if you have that many plants to choose from, it would be best to refresh the gene pool of your corn field by occasionally introducing new seed from elsewhere. (For the same reason, if you want to grow "Indian" corn, you should buy a good-sized package of seeds, instead of relying on one or two ears from a Thanksgiving decoration.)

In late summer, when the corn begins to ripen, you can pick some of it and eat it as "corn on the cob," just as with sweet corn. To remove an ear, grasp it firmly, then twist it while you bend it downwards. You can leave the husk on and place the ears in the ashes of a fire. Most of the ears, however, should be left until the plants have gone brown and dried. The ears can then be brought inside. Pull the husks back and hang the corn up to dry.

Actually there are several ways of harvesting corn. Some people prefer to cut the plants close the ground, stack them together, and then tie them, somewhat in the manner of harvesting wheat, instead of removing the ears immediately. The plants can be left that way to dry for a few more weeks.

At some point you have to get the roots out of the ground. You might find that you can just pull up the entire plant, although that can be tiring. Or you can dig them out with a spade or shovel.

The native people crushed the kernels into flour in a huge wooden mortar and pestle, or the crushing was done with two stones, the bottom one wide and flat, the top one smaller and rounder. The finished cornmeal was used to make soups, pudding, or bread. Nowadays a good steel hand-mill does a quicker job.

Posted by Peter Goodchild at 4:40 PM